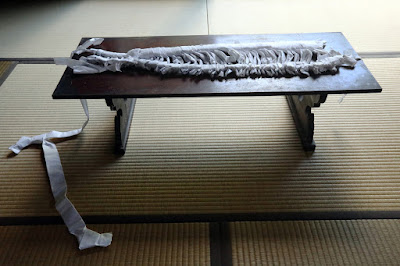 
The theoretical framework combines two notions of time: the first one, which is defined by the conditions of Yamakiwa Gallery and Art-Hotel, is understood as a temporal and nomadic establishment, or a place where people come and go in journeys on a short-term basis. And the second notion of time, which is outlined by the Echigo-Tsumari region of Japan, defined by its permanent and sedentary condition, distinct by its nature, history and culture: a long-term temporary dependency.

In his book ‘The Shape of Time’ (1962), George Kubler studies the methods used to study time within Art History. For the American art historian, time, like the mind, is not knowable as such. We have access to it only indirectly by what happens in it. To understand time is necessary to observe processes of change and permanence. On the one hand, historical time is understood on the basis of the linear sequence of events. Hence, there are ruptures and empty spaces –which ultimately connect such events. Biological time, on the other hand, contains uninterrupted events, these are called ‘lives’ –in life, there are no ruptures or voids—. Under the lenses of the biological type of time, art is conceived as a free system with successive stages of development.[1]

Kubler argues that the historical discipline uses these two modes of conceiving time, but they have great limitations. According to him, both the linear/progressive time, and the uninterrupted/biological time, lead to misread art. These two conceptions cannot account for what he calls ‘the true intermittency of time’. Therefore, he proposes to use the language of electrodynamics, which can express with more accuracy the phenomenon of the multidirectional transmission of energy that happens within art. The experience of art is not linear or evolutionary, but irregular with spaced bursts of chaos.

Inspired by these ideas, and in the context of a traditional Japanese farmer’s house located in the green mountains and rice fields of the village of Tokamachi, Niigata, By Indirections Find Directions Out gathers a constellation of creative strategies and artistic forms that access the unknowability of time. It points out cultural and geographical juxtapositions; experiences of anachronism, moments of synchronicity, produced, represented and manifested in contemporary art. It alludes to the changes and alterations of the messages and the energy that art contains, produce and transmit to us. It traces the various routes, the multidirectional paths, the intermittent courses by which things, matter, places and bodies shape, transform and become, within indirect and direct frames of time.

Mary Hurrellhas created ちょう, a site-specific performance to culminate her artist residency at Yamakiwa Gallery, Tokamachi, Niigata, Japan. The performance has been inspired by her research into traditional forms of Japanese performing arts, in particular Butoh and Noh, and kimono as a symbol for multiplicities of the feminine within Japanese history and culture. The garments and sound work have been developed through processes of layering, transfer, translation, transformation and natural elements. The performance takes the form of a walk or movement through the gallery house, compressing layers of internal and external spaces; through sculptural garments and a travelling soundscape, the movement will unfold and become sculpted in real time.

The dark imagesofCarlos Santos contain black crushed marble, synthetic fibers, animal charcoals, vegetable pigments, concrete derivatives, polyurethans, ashes and waterproof materials for the construction of buildings and houses. His work is characterized by texture, traces of burns and cuts, a sense of tactility, and an emphasis on the physical, earthly and material qualities of the elements that he employs. The artist address aspects of life and death, metamorphosis, nature and alchemy. He also translates architectural and socio-political discourses from his context into plastic language. In other words, he extracts references of places, structures and spaces, and transforms them into raw matter but also into art.

The drawing The Imprint of Strengthby Mariana Magdalenotells a story about the internal rhythm and latent pulse of nature. It represents the birth of a cicada, which spends seventeen years underground, until its death, portraying this cycle along with the interval of its life. Thus it shows perennial flowers closing and opening during the day and night; a ‘night blooming cereus’, which is a cactus that blooms only for one night and dies the next day; a migratory bird; the transformation of a caterpillar into a monarch butterfly; stones that symbolize eternity; smoke, which marks a subtle and ephemeral lapse of time. The drawing runs through a linear timeline: it has a narrative, a beginning and end, but inside the image, many things happen, and they take us through several temporal spheres, advocating in favour of the magic, spirituality and power that can be traced in the relationship of nature and time.

Sacred Sourceby Dominic Hawgoodis an assemblage of light, optics, and water; elements that take different forms within Hawgood’s practice, and are present in his most recent project Casting Out the Self which explores digital aesthetics and shamanism.  He investigates psychological space and reflects on the experience of the real world within the virtual.

Patricia Dominguez’ digital collagesareimages that appeared to the artist in a dream. Shapeshifter Linesalludes to the complex intersection of traditions from pre-Columbian civilizations and the corporative contemporary world. She examines the transferals of indigenous cosmologies in Chile into corporate matters, and office aches and incidents. Through an ancient object from the Diaguita culture, a man wearing a corporative shirt, rubbers his back. The Atacama Desert is a land now dominated by lime extraction industries and coal-fired power generation companies. A contract signed in an office in Germany moves almost instantly natural resources in Chile. But, work in the office and long hours in front of the computer produces pain. The business men she represents uses the ceramics on their tired bodies to look for relief.

Mehr Fantasieby Julia Varelaraises questions about electronic waste and its impact in the environment. Digital waste such as plasma screens and iphones have been reduced into dust. They have been transformed into solid, rigid substance, similar to concrete or clay, able to be applied on the body. These irrelevant dispositives have transformed from being virtual lenses of reality into physical matter, into ashes. The ashes are displayed as sculpture in the gallery and incorporated in the body of the creatures the artist captures in a video.

Gaia Fugazzapresents Lake of Singing Frogsand Trinity Panther: two artworks made of rubber, chalk and nail polish; materials approached for their symbolic properties as much as for their physical ones. These images portrait plants, animals, geometrical forms and natural elements with a sense of sentience: equal to people and capable of shared emotions. There exist a desire for a stronger intra-species relationship, interlacing within an animist landscape. Her work lead to think about topics such as nomadism, botanic, shamanism, reproduction, multiple presences, experiments or rituals and divinity.

In his concrete poetry The Language of Flowers, and his film The Tree Circus,Love Enqvistexamines the process of living and the condition of life. Axel Erlandson was a Swedish American farmer who shaped trees during his life and eventually opened a Tree Circus in California. It was a life-time project for Axel to sculpt growing trees and fits into Ikebana tradition. The intention was to experiment with and train trees to grow in ornamental and pure geometric shapes. A few trees were saved after his death and moved to Gilroy gardens (California). But most of his trees are lost. What remains are oral history. Some photographs and a few saved trees (which were saved by an architect interested in botanic architecture).